JUMP: TRY BEFORE YOU BUY 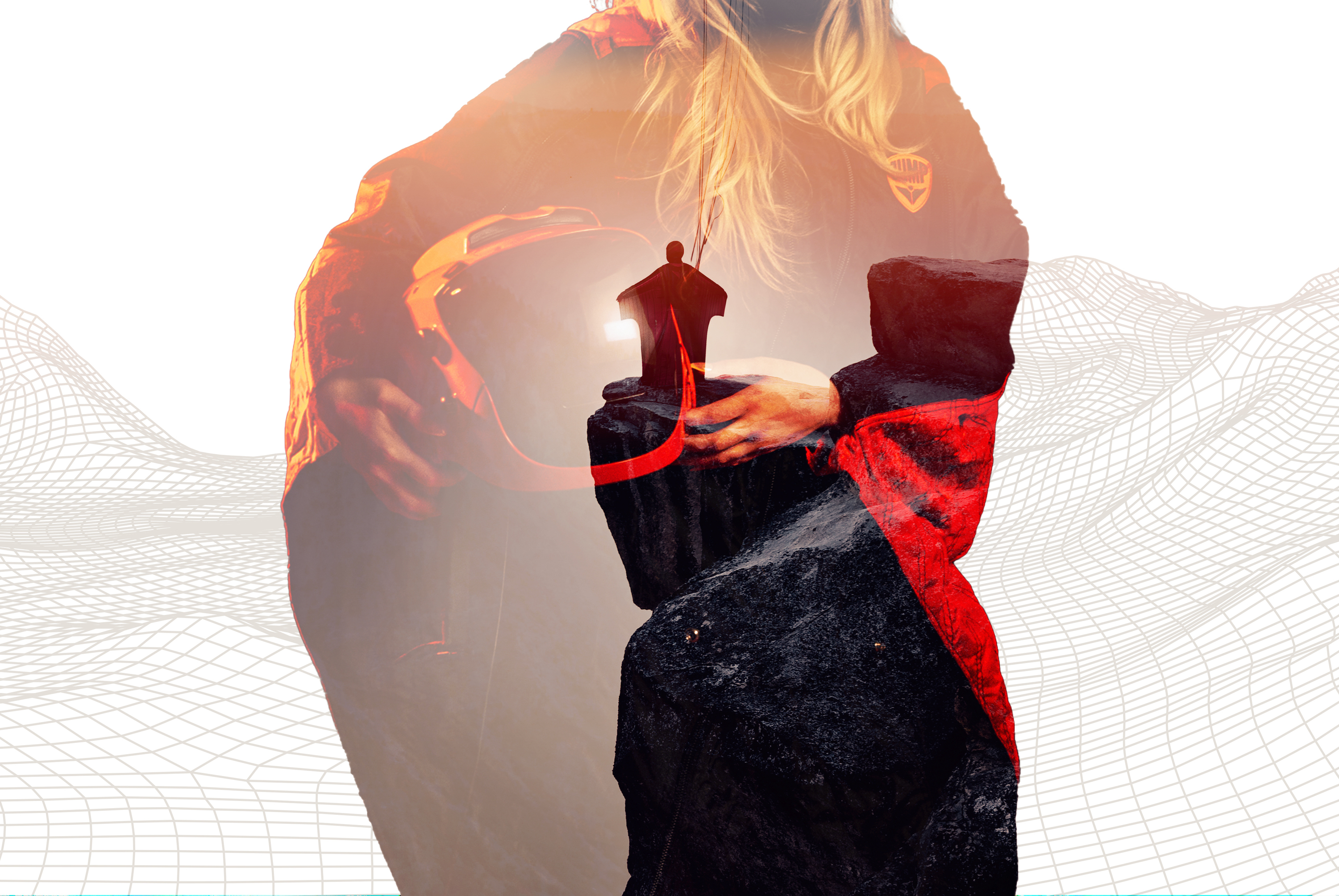 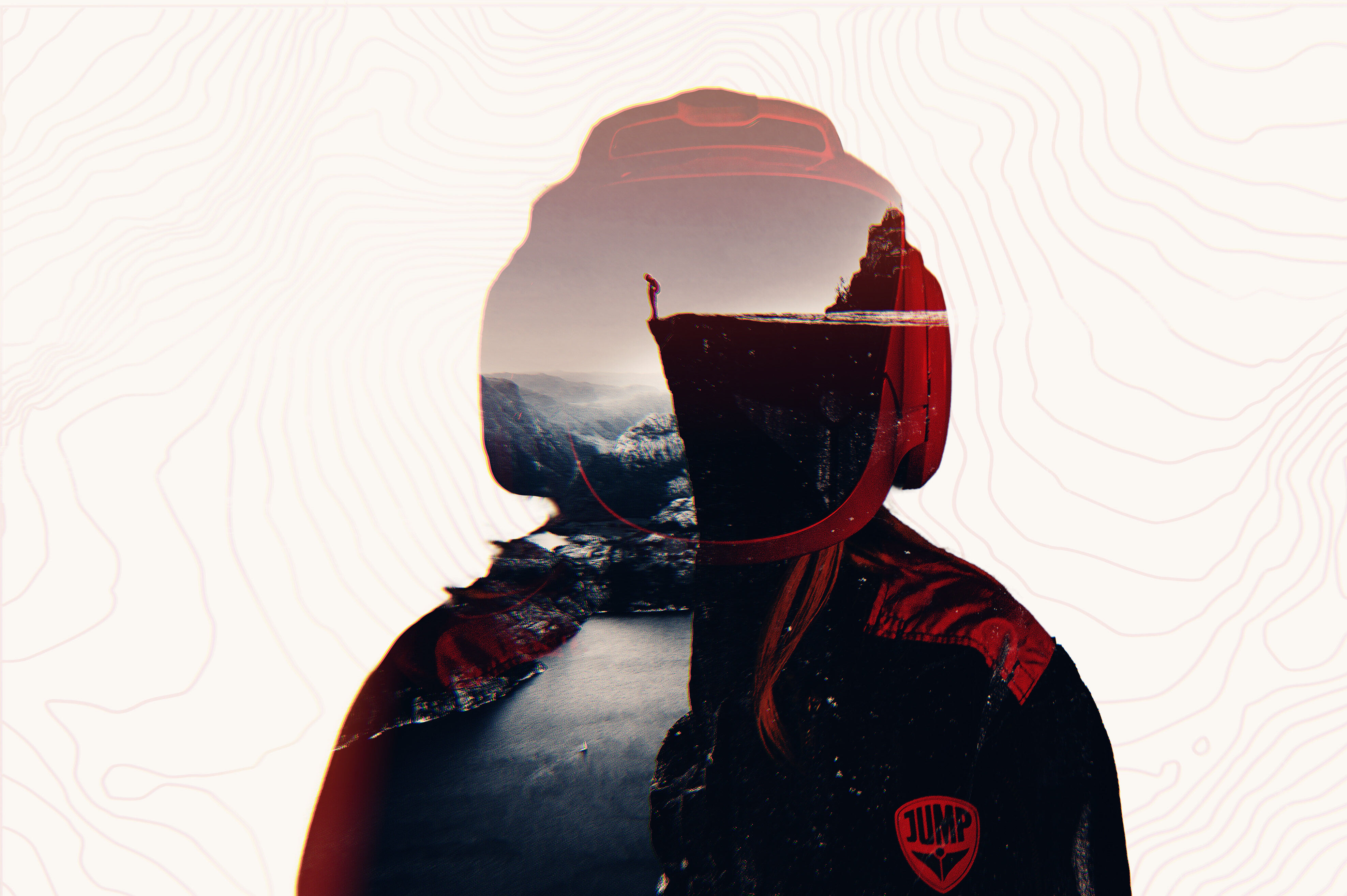 Curious what it’s like to sport a wingsuit? Wondering what hyperrealism feels like? You’re in good company. In 2016, James Jensen envisioned JUMP’s innovative and immersive experience. Read on for his take on how your initial—possibly life-changing—flight might feel.

I've always wanted to feel what it was like to leap out of an airplane or soar across a canyon, but I’ve never had the time, money, or death wish to make it happen.

JUMP is all of the adrenaline with none of the risk.

I visited the JUMP website and browsed their hyperreal BASE jumps: mountain ranges, skyscrapers, sheer cliffs, and superhero jumps from popular movies. It was difficult to narrow it down, but I decided on an exit point on Tianmen Mountain in China.

I shared my excitement about the upcoming jump in an Insta story, and a few friends asked if I were really headed to the Tianmen Mountains. The FOMO was real. They decided to join me on the JUMP.

When we arrived at our hangar, I knew JUMP was different—the place screamed extreme sports. And it was hard to miss the JUMPers who walked out with huge smiles as they watched their flight videos. Best. Decision. Ever.

After we checked in, a JUMP operator greeted us and guided us to orientation. The pre-flight video introduced the JUMP wingsuit, helmet, and clued us in to a few different flying tips. After watching the training video, we moved to the suit-up area, stepped into our wingsuits, and followed the JUMP operator’s instructions to our designated bays.

When we stepped into our bays, the JUMP operator handed me a super professional-looking helmet outfitted with a high-end VR setup featuring optics, screens, and custom headphones. Think VR gaming headset but on steroids times 100.

After slipping on the helmet, I was joined by a JUMP Crew member for final checks and a safety refresher. Before long, we were on our way to Tianmen Mountain, accompanied by human flight pro, Marshall Miller.  It wasn’t long until a huge helicopter lifted the walls and ceiling and I was standing atop the Tianmen Mountains, just feet from the exit point.

With some guidance from Marshall, I stepped forward until my toes were over the edge. I could feel the wind, hear the sounds of nature, and smell the clear mountain air.  My buddies, who were standing next to me, could too. It was unreal.

Soon, Marshall was starting the countdown. He would jump first and we would follow . . . hopefully.

Marshall disappeared over the edge, and I stepped into his place. My heart was pounding, and I had to remind myself that I was safe. I took a deep breath before leaning out and pushing off.

At first, nothing. Then, falling.

At least that’s what I thought, and for a second, I couldn't breathe. Then the wind hit me in a rush, and I was flying.

Our headsets were connected, so I checked on my friends.

“Did you guys jump?”

“Yeah! We’re right behind you!”

I leaned left or right to control my direction, and the terrain flew by—tree lines and mountain tops appeared and disappeared. I got a little more daring, at one point flying about 10 feet off the ground, right between two pine trees.

As I neared the landing zone, I tugged on the strap to release my chute. Boom! My chute deployed and tossed me backward. I controlled it by toggling the straps on either side of my chest. The ground approached, and I extended my legs to meet it. My friends touched down with me, and we couldn’t contain our excitement.

After I took off my helmet, I discovered I was back in the same JUMP bay where I’d started. I couldn’t believe that my entire JUMP had happened in this small space. The operator escorted me out of the bay and to the suit-down area. Once back in our street clothes, we headed to Base Camp where a professional-style sport video of my flight was playing on a huge LED wall. After a few seconds, the screen changed, and I could see my friends in the frame with me. It was incredible.

After watching the footage, I immediately reserved my next jump. I've seen photos of Dubai. I simply have to know what it’s like to jump off a skyscraper in that gorgeous city.

GET THE LATEST ON EVERYTHING JUMP

Thank you! Your submission has been received!
Oops! Something went wrong while submitting the form.